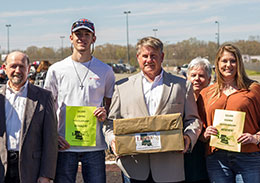 The afternoon featured the first opportunity of the year for eligible Louisiana students to receive scholarships from the LQHBA Scholarship Fund. Random drawings are held several times each racing season at tracks around the state; more than $570,000 has been earmarked for this program since its inception in 2001.

From Keatchie and a graduate of Logansport High, Mcfadden is a junior kinesiology health science student.

“I love it,” she said. “I decided to come to Tech because of their outstanding clinical kinesiology program and the family-like atmosphere. There aren’t many universities where the teachers would know me by Faith, rather than my generic first name (Maddison) that shows up on the computer, but Tech is one of those places. The professors here make an effort to be personal to each of their students, and I was really drawn to that asset.”

“The scholarship from the LQHBA is very impactful on my education and will really help my family out, especially since I plan on attending Physician’s Assistant school in Shreveport immediately after graduating next May,” said Mcfadden, who owns a quarter horse named Popper. “This is the second year I’ve been fortunate enough to receive this award; I can definitely say the LQHBA has been very impactful in mine and many other students’ education, and I am very grateful for them and for Mr. Tony (Patterson, executive director of the LQHBA and a Tech alum) for offering this opportunity for students in Louisiana.”

Fertenbaugh came to the races with his mom “to enjoy the day” and left with a scholarship he’ll use in the fall.

“I’ve chosen to come to Tech because it’s not too far away from my family and because if offers one of the best engineering programs in the state, if not the country,” Fertenbaugh said. “I plan to major in mechanical engineering because I love working with moving parts and designing things so they’ll be stronger than they were before.

“I saw the scholarship table, filled out a form, and waited for the announcements of the winners after the fourth race,” he said. “I got lucky.”

For more information on the LQHBA Scholarship Program, visit LQHBA.com or call the LQHBA office in Alexandria at 318.487.9506.