A decorated and hard-working Louisiana Tech senior biology major, Conner Hartupee will visit Washington, D.C., May 21-23 as one of only 10 students from throughout the country to participate in a highly competitive nationally funded program that brings new generations of researchers into the science community. 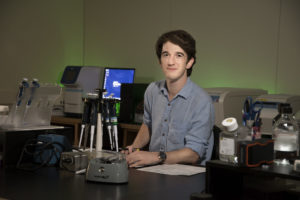 Hartupee, who will apply to medical school next year, was nominated by his mentor, Biological Sciences Assistant Professor Dr. Jamie Newman, when nominations were solicited from faculty involved with the  Louisiana Biomedical Research Network (LBRN).

Named one of the school year’s two featured students from the School of Biological Sciences at Tech — Kaitlynn Willis is the other — Hartupee earned this experience through the IDeA Networks of Biomedical Research Excellence (INBRE), funded through Congress and designed to help student researchers share the importance of research by having them travel to Washington to meet with key staffers from their state’s congressional offices and be trained by members of the Van Scoyoc Associates (VSA), a Washington-based government affairs firm, about the IDeA program, its funding, and how to perfect an “elevator speech” to help them educate their state’s governmental servants on why research opportunities are so important.

“I’m extremely excited to go to D.C. and talk about how significant undergraduate research has been for me,” Hartupee said. “To be nominated for this by my research professor and chosen by the LBRN coordinator to have this once-in-a-lifetime opportunity both fills me with pride for the education I have received here at Tech and reaffirms that everything I have done so far has made an impact on the University.”

Besides meeting with the nine other students from around the country, Hartupee is scheduled to meet with the president of the National Association of IDeA Principle Investigators (NAIPI), the executive director of the Established Program to Stimulate Competitive Research (EPSCoR)/IDeA Foundation, and the president of VSA. Hartupee will also spend all of one afternoon visiting members of Congress.

“In the end, I think a lot of my experience here at Tech ties back into Dr. Newman presenting me with amazing opportunities and the culture within the Newman Lab being the friendliest, most supportive academic group I’ve seen here at our University,” Hartupee said. “Without these people I can’t say I would be doing as much as I’ve done in the last two years.”

What Hartupee’s done is significant. Most of it has been helping fellow students. From his nomination:

“Conner has been doing research in Dr. Jamie Newman’s lab for two years on an LBRN-funded project and has demonstrated incredible independence and dedication to research. He takes initiative, reads the literature, and problem solves. In addition to research Conner has dedicated a large amount of his time to helping his fellow students. He has organized MCAT study sessions (the standardized test for Medical School admission) for the past year and is organizing shadowing opportunities around Ruston so that students can more easily find these opportunities…Conner goes above and beyond in all that he does and would appreciate such an opportunity.”

Hartupee was also one of a dozen Tech students who represented Tech at the University of Louisiana Academic Summit this winter at Grambling State.

“The quality of the Summit was one of the best conferences we had been to this year,” said Hartupee, who earned the spot by finishing in the Top 5 for his presentation at the University’s Undergraduate Research Symposium. “We went to the conference to talk about our research with other students across the University of Louisiana system; there were no competitions on the presentations, so it was refreshing to just look into everyone’s research.”

Hartupee’s score on the MCAT, the Medical College Admission Test,put him in the 96th percentile, one of the best performances ever by a Tech student on the MCAT.

“That was one of the most rewarding moments in the last few years, because it showed me that putting my energy towards something can really pay off tremendously and that I’m just as prepared for medical school as any other student in the country,” Conner said. “The score opened more doors for me than I had originally considered when I was applying last summer. It made me rethink the application process and my status as an applicant, so I decided to take a gap year from medical school to become a more well-rounded applicant. It also gave me confidence in giving proper advice about the test itself when I sit down and talk to other students about what to do in order to prepare for the test.”

For his “year off” he’s been accepted to the Alumni Service Corps program at Jesuit High School in New Orleans — he’s an alum — where he’ll be a full-time volunteer teacher.