A publication by two former Louisiana Tech doctoral students was selected as the best submitted paper of the year to the Journal of Functional Materials and featured recently in Stockholm, Sweden, at EUROMAT 2019, the annual European Congress and Exhibition on Advanced Materials and Processes. 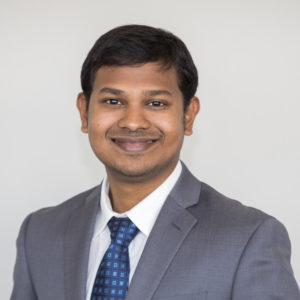 Dr. Karthik Tappa, Dr. Udayabhanu “Uday” Jammalamadaka, and Dr. Jeffery A. Weisman pioneered the project as doctoral students in the BioMorph Laboratory of Dr. David K. Mills, Biological Sciences professor in Tech’s Center for Biomedical Engineering and Rehabilitation Sciences. Both Karthik and Uday continued this work as post-doctoral fellows in the Department of Radiology at Washington University in St. Louis, where they are both now research scientists. They designed a graphic illustrating their work for the cover of a special issue developed for the conference in Sweden.

The publication, “3D Printing Custom Bioactive and Absorbable Surgical Screws, Pins, and Bone Plates for Localized Drug Delivery,” was highlighted at the conference by the publisher, MDPI, a publisher of peer-reviewed, open access journals, and is available online.

The research is both timely and critically important because in today’s medicine, supports or implants to help support fractures — the rods, screws, plates, and pins — are metals. Those can cause infections, must often be removed, and become problems in future MRI scans or other diagnoses.

“In our research, we developed a novel method to create these supports using biodegradable and antibiotic loaded materials,” Uday said. “Having antibiotics make these implants resistant to infections and degrade within our bodies harmlessly after the bone is completely healed.”

Using novel 3D printing technology, we have developed methods to fabricate screws, pins, and plates that can biodegrade over a long time and can release anti-infective and/or anti-cancer drugs at the site,” Karthik said. “These hardware devices can potentially prevent or cure infections at the site of implantation. 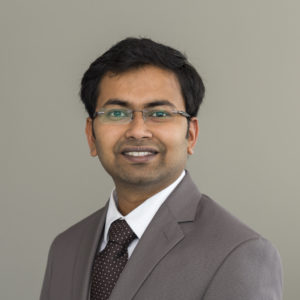 “Biodegradable screws have been gaining popularity recently and are now commercially available,” he said. “Though they are proved to be more effective than traditional metallic implants, their usage is limited due to low mechanical strength and lack of variety. Immense research is ongoing to improve these materials.”

“But none of the currently used implants have bioactive antiobtics in them (as ours does),” Uday said. “Significant amounts of research is going on to improve these bio-absorbable implants to broaden their applications in various ‘ortho’ applications.”

Both Karthik and Uday are from the same hometown of Hyderabad, India, and both earned from Tech their masters in molecular sciences and nanotechnology in 2014 and their PhDs in biomedical engineering in 2016.

As Tech students, both Karthik and Uday were strongly influenced by Mills, the project director/major professor in the research group; Mills initiated the writing of the winning manuscript.

Also, both Karthik and Uday chose Tech over several other options.

Karthik made his decision “based mainly on the academic reputation of my major,” he said. “Also, I chose to be a part of the diverse student body. I have found opportunities for personal growth and development not just academically, but also to expand beyond classroom knowledge. My studies at Louisiana Tech have given me a solid foundation for a career in the Medical 3D Printing field, and I am so glad I made the decision to go to school there.”

“I chose Tech for the kind of research it has,” Uday said. “Going through online resources about professors, I found Tech could be the right place for me. After joining Tech, I realized it’s not just academics and research but it is the ‘Tech Family’ I chose to have far from home. The support and resources Tech had to offer made me grow in all possible areas and made me ready for pursuing my career in research.”