Fifty years after graduating from Louisiana Tech, Jim Wilson returns to campus this week to share his latest class project. 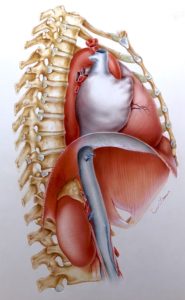 An anatomical illustration depicting the close proximity of the adrenal gland to the heart. Watercolor and airbrush image by Jim Wilson.

Wilson, who earned a BS in Commercial Art with additional studies in the biological sciences in 1969 at Tech and a MS from the Medical College of Georgia in 1974, will have an exhibit in Marbury Alumni House beginning Wednesday and running through Homecoming Saturday and most of November. The show, sponsored by the College of Liberal Arts and the University’s VISTA Center, will feature his artwork from the time he was a student through his career as a medical illustrator; he’ll also be celebrating his 50-year class reunion during this Homecoming Week.

The exhibit is called “Visual Imagery in Science and Medicine, A Fifty Year Retrospective Exhibit of Alumnus and Medical Illustrator Jim Wilson,” and will include around 70 illustrations depicting a variety of subject matter and illustration techniques.

Wilson was introduced to medical illustration by his family physician, Dr. Stuart DeLee, when he was a student at C.E. Byrd High in Shreveport.

“He recognized that I had an art talent and a strong interest in science and medicine, so this seemed to be a natural fit for a future career,” Wilson said. “I came to Tech because it had a reputation for an outstanding art program and a great biology department, both of which would prove beneficial in preparing me to pursue my goal to become a medical illustrator. I owe a great deal to Tech in this pursuit because the University allowed me to tailor my degree to meet the requirements for graduate school. This was a rarity in those days.”

Following graduation, Wilson first worked at LSU Hospital in Shreveport as the Medical Graphic Artist in preparation for his career objective to become a medical illustrator. Two years later, he entered the Medical Illustration Graduate Program at the Medical College of Georgia and graduated with a master’s in 1974.

In graduate school, Wilson was trained in the traditional techniques of medical illustration using watercolor, carbon dust, and pen and ink.

“In recent years however, the advent of computer generated visuals has made the greatest impact in the toolbox for medical illustrators and has now become an integral part of medical illustration, opening the door to creativity that was once unattainable using the more traditional art techniques,” he said. “Because digital illustration came along late in my career, I have continued in the more traditional techniques and use the digital platform in a very rudimentary form.”

He returned to Shreveport in 1976 and became the Senior Medical Illustrator at the Veterans Administration Medical Center. During this time, he began work as a part-time freelance medical illustrator, providing services to the Departments of Orthopedics and Neurosurgery at LSU Medical Center and to other hospitals and clinics in the area.

In 1978, he was employed by LSU Medical Center as the Medical Illustrator and Head of Medical Illustration and Graphics Section while he continued his part-time freelance work on a regional basis.

In 1988, as his freelance opportunities continued to expand, he opened Wilson Medical Illustration as a full-time freelance medical illustrator specializing in illustrations for publications and presentations primarily in the areas of orthopedics, neurosurgery, and general surgery. Today, in addition to these services, he also provides medical-legal illustrations for attorneys involving personal injury, wrongful death, product liability, and criminal cases.

Now Wilson works out of the home studio he built 28 years ago and, as is typical of most artists, has no plans to retire.

“I don’t believe you just ‘hang it up’ at some point when God has blessed you with a talent that you can continue to enjoy,” he said.

Wilson currently serves on the Advisory Board of the University’s VISTA (Visual Integration of Science Through Art) Center, Tech’s Pre-Medical Illustration Academic Program. VISTA encompasses faculty from art, science, and engineering working together to offer students a unique opportunity to communicate science through art. For more information on VISTA, visit latechvista.com.

“As innovations in science and medicine continue to rapidly expand, so does the demand to share these new discoveries, treatments, and technologies through the use of various forms of visual communication,” Wilson said. “The VISTA interdisciplinary approach through art and science has positioned itself as a pioneer in preparing students for this vital communication role. Using state of the art digital technology and creative media resources, this collaborative effort provides a learning atmosphere that is comprehensive and challenging by encompassing a high degree of problem solving, critical thinking, peer review, and presentation elements that are essential in preparing a student for all communication modalities.”

Wilson will have more printed information about both VISTA and necessities for a career as a medical illustrator at his show.

He is married to Kathy (Layton), a 1970 Tech graduate and retired art teacher. They have two children, Allison Roark (Springfield, Virginia) and Leighton Wilson (Austin, Texas) and four grandchildren.