When SpaceX CSR-21 launches from the Kennedy Space Center Dec. 5, a small piece of Louisiana Tech University ingenuity will be on board. The tool will hopefully provide significant enhancement to the bioanalytical capabilities of the International Space Station (ISS) and impact how future space biology genetic research is conducted. 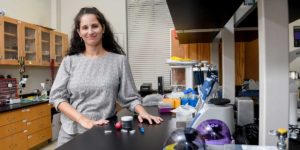 At the core of this one-step gene sampling tool is a microscopic pin for selective, solid-phase, and minimally invasive RNA purification. The extraction is completed after insertion of the gene-sampling pin in the specimen that is followed by direct analysis in the ISS genetic testing hardware. The one-step gene sampling tool enables gene expression analysis at variable intervals without destroying the specimen while reducing the amount of liquid handling and NASA crew time.

The successful launch of the technology to the ISS involved work with several NASA centers, including Johnson Space Center, Kennedy Space Center, Marshall Space Flight Center, and the WetLab-2 team at NASA Ames. Once on the ISS, astronaut Dr. Kate Rubins will validate the technology and perform RNA purification and genetic analysis of radish plants.

“We need to know how to grow plants, which genes are important for the plants to grow in microgravity, how they change so that we can develop the best crops on Earth to grow on Mars,” Nestorova said. “This technology helps assess how plants respond to the space environment and what changes inside the plant on the genetic level.”

Currently, crew time allocation is the main barrier to broad use of the ISS genetic testing tools. This gene-sampling technology will allow research teams to receive data on experiments the same day they are conducted.

“Being able to quickly analyze and assess the plants’ genetic activity in response to microgravity and radiation will help solve one of the biggest problems inherent in extended space travel – the need for food to be grown in space itself,“ Nestorova said. “We will be virtually present during the experiment, communicating with the crew, and download the results from the ISS immediately after the test. Successful outcome of this project could lead to an increase in genetic screening that will be performed on the ISS. This will open new possibilities in space-related research.”