Dr. James Dickson, the Frank Merritt Professor of Forestry and wildlife habitat management coordinator for Louisiana Tech University’s College of Applied and Natural Sciences, has been selected by Louisiana Life magazine as one of eight 2012 Louisianans of the Year. The eight members of the Class of 2012 were selected from a statewide pool of candidates that included conservationists, visual artists, civic activists, educators, celebrities, chefs, musicians, and entrepreneurs.  Other honorees include Chef John Folse, alligator hunter and television celebrity Troy Landry, and New Orleans musician Troy “Trombone Shorty” Andrews. 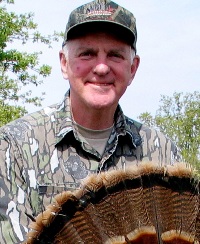 “I was surprised and honored when I learned of my selection, especially when I thought of all the people that could have been included,” said Dickson.  “My career has been very rewarding.  After I retired from federal service, I was able to come to Louisiana Tech to give something back.” Louisiana Life covers lifestyles and destinations throughout the state and is Louisiana’s only statewide general interest publication.  Published in its January/February edition, the 2012 Louisianans of the Year comprise the magazine’s inaugural class of honorees.  Dickson’s selection to this prestigious group was largely based on his many accomplishments in and contributions to the field of wildlife habitat management. “My research has helped to define southern wildlife habitat relationships,” explains Dickson.  “With lots of help, I was able to synthesize what we know about the wild turkey and southern wildlife.  Both of my books on these subjects, ‘The Wild Turkey: Biology and Management’ and ‘Wildlife of Southern Forests: Habitat and Management,’ won the Outstanding Book Award from the The Wildlife Society – Southeast Section.” In addition to his award-winning books, Dickson has also written more than 100 technical publications and presented at numerous conferences and symposiums, helping to define habitat relationships of southern wildlife. “I work to inspire students to understand nature and ecological principals, grasp a greater understanding and appreciation of game and nongame wildlife, and understand how to manage wildlife species and communities,” Dickson said.  “The perk for my job is to see graduates in responsible positions managing wildlife.” Dickson credits his family and his national service for his success.  “I’m most proud of my family.  They’re so accomplished and kind.  What higher accolade than to have a family that thinks I’m a hero.  I’m also proud of my service to my country as a line officer in the U.S. Navy.” Dickson earned a bachelor’s degree in forestry from University of the South (Sewanee), a master’s degree in wildlife management from the University of Georgia, and a Ph.D in forestry from Louisiana State University.