ANS professor participates in national symposium on the future of zoos

If Dr. Jeffrey Yule, assistant professor of biological and environmental sciences at Louisiana Tech University, and his colleagues are correct, zoos in the future could feature cloned extinct species, robotic animal exhibits, and parks where the visitors are confined and the animals are free to roam the grounds. Yule was among a group of experts from the U.S. and Europe representing various biological science disciplines who were invited this month to participate in the “Symposium on the Future of Zoos” held at Canisius College and the Buffalo Zoo in Buffalo, New York.  The goal of the symposium was to discuss and envision what zoos might look like in 50 or 100 years, as a result of an ever-growing human population and dwindling wildlife habitats. 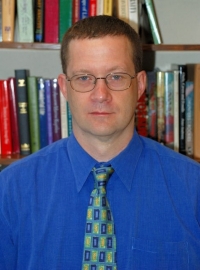 “In a time when so much of our thinking has become increasingly short-term, we’re losing sight of the fact that our decisions often have long-term implications that we should be, but haven’t been, considering,” said Yule.  “Discussions at the symposium ranged widely and both the presentations and the full-symposium discussion periods following the presentations were lively and thoughtful. “For me, the most memorable and significant aspect of the symposium was that it took on a long-term focus on how the zoos of the future might differ from those of today.” Extinctions, particularly their causes and consequences, and ways of preventing them, are Yule’s primary research interest.  During the symposium, he was asked to discuss the prospects of cloning extinct species, particularly those that have gone extinct within the last 20,000 years. “Symposium organizers looked at whose research was addressing questions of concern to them,” Yule said.  “In addition to researching the potential human role in prehistoric extinctions, I had also considered the question of whether or not cloning extinct species would be a reasonable, ethical course of action in the future.  Because that work was of interest to the symposium organizers, they invited me to participate.” Yule said that he largely agreed with his colleagues at the symposium in that future zoos will be less likely to house animals in cages and more likely to give humans protected access to wildlife in the context of larger, far less restrictive habitats.  Essentially, the humans would be relatively confined, perhaps in vehicles, while the wildlife would move about freely. As someone who teaches biology and environmental science courses, Yule says he is delighted to be able to bring a unique perspective back to Louisiana Tech to share with his students in the classroom. “Meeting and speaking with leading world experts in zoos provided me with a range of perspectives on one of the most important sorts of institutions involved in public education about and conservation of global biodiversity,” Yule said.  “It’s important to remember that zoos aren’t simply places to be entertained.” The symposium and its participants have received a great deal of national media attention as a result of their insights and discussions including coverage by such national outlets as Fox News, MSNBC, BBC, and Discovery Channel News. Yule believes its the children and grandchildren of this current generation that stand to either gain or lose a great deal on the basis of the decisions that are being made right now. “Both explicitly and implicitly, the symposium recognized and addressed that important (but often overlooked) reality.”