Louisiana Tech’s school of biological sciences scored big when former Duke University and New England Patriots offensive tackle Brandon Moore joined the faculty. The assistant professor, 6-8 and 315 in his playing days, took an unusual route in becoming a tenure-track assistant professor. First there was the decision to attend college 400 miles from his hometown of Philadelphia, Pa., and play ball in North Carolina at Duke, a school known for brilliance in the classroom and on the basketball court but not so much on the football field. A big part of the decision was Duke’s newest coach. 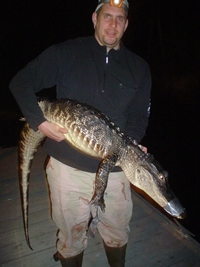 “I looked all over the country,” Moore said, “but the chance to go to Duke and to play for Steve Spurrier, I couldn’t beat that.” The offensive-minded Spurrier and the tradition-poor Blue Devils were coming off a rare pair of winning seasons when Moore joined the team in 1989. He would become a member of the Atlantic Coast Conference football champions as a freshman and letter each season from ’89-92. Moore was also a two-year starter, twice Academic All-ACC and double-majored in political science and sociology. Here, the road to university professorship gets a bit more intriguing. From 1993-’95, Moore played for the NFL’s Patriots, mostly behind All-Pro tackle Bruce Armstrong. And when the Patriots went to Super Bowl XXXI the next season and began their current streak as one of the league’s modern elite, Moore was back in school, this time earning a Bachelor of Science in life sciences at Arizona State. After that he was back with Spurrier, in a sense, as Spurrier coached the Florida Gators and Moore earned his Ph. D. in zoology at the Gainesville university. After a decade there, Moore spent a year as a postdoctoral fellow at Tulane in New Orleans before coming to Tech in February of 2011 with his wife, Dr. Thea Edwards, and their two children, Christopher, 5, and Nicholas, 2. Tech scored twice with Moore’s hire. Like her husband, Edwards has a Ph. D. in zoology from Florida and is an assistant professor in biological sciences. The couple applied as individual professionals, and Tech reviewed their applications as individual applicants. “The search committee ranked Dr. Moore and Dr. Edwards as the two strongest candidates,” said Bill Campbell, associate dean for the College of Applied and Natural Sciences. “However, at that time we were unaware that Dr. Moore and Dr. Edwards were married to one another.  With the addition of these new faculty members, our students will have expanded opportunities for research experience, and we anticipate that our classroom teaching will also benefit; they bring a solid background and strong training in several areas of biology.” Moore’s duties involve both teaching and research and he’s “happiest when doing both; a lot of what I do is mental,” he said, “but a lot of it requires physical output too.” If that sounds familiar, think football. As the left or “blindside” tackle, Moore played a position both mentally and physically challenging, one that demanded quickness of mind and feet. “People don’t really appreciate the changes in strategy and assignments, things you have to react to in milliseconds,” he said. “When the defense changes, you have to change. It’s a very cerebral and a very physical position.” Moore’s research – a study of how environmental pollutant exposures impact the sexual development and reproductive fitness of wildlife – is similarly demanding and involves both field and lab components. To study wildlife, you often have to bag wildlife. “His work bridges the range of biological research from the molecular to the whole-organism levels of organization,” Campbell said. “This provides students with a range of possible research experiences when they work with Dr. Moore. Brandon’s research is germane to important issues in the state of Louisiana, and there are a number of opportunities for him to collaborate with faculty on the Tech campus, as well as with regional and national researchers.” Currently Moore is studying mercury bioaccumulation in spotted gar, the “lions of the lake.” Though vital for ecosystem health, gar are showing increasing mercury levels in their tissues during their lifetimes. “Greater levels of mercury accumulate in gar liver than in muscle,” Moore said. “Livers perform many functions, including the production of egg yolk proteins in female fish. A properly functioning liver is necessary to produce healthy, fertile eggs. I am investigating the negative impact of increasing mercury levels in gar livers on the fish’s capability to produce egg yolk proteins and therefore have maximum fertility.” Sounds tough to tackle. But Moore’s used to that.   Five Questions with Brandon Moore: How did your interest in biological sciences begin? Exploring for crawfish and bugs in ditches as a kid.   Which school was harder, Duke or Arizona State? I would like to redefine the term ‘harder.’ Rewarding things are often challenging and difficult. I have spent my life searching out challenges. Both schools provided challenges I was looking for.   Why the move to Louisiana, and did it have anything to do with alligators? My post-doc was at Tulane.   Which is harder, blocking an Oakland Raider or bagging a croc or gar? Most days I’d choose wildlife over people.   What kind of ‘lessons’ from athletics you’ve been able to take into your professional academic career? Work hard and periodically redefine your definition of ‘hard’; Set goals, achieve, repeat…; Do not miss opportunities; being absent or last is easy; Challenge yourself more than others do; Look around; life is short.” Written by Teddy Allen – teddy@latech.edu