Make no bones about it, Louisiana Tech’s SciTEC Center has some useful new exhibits all thanks to a few skeletons in a closet. Or make that a room instead of a closet. Six animal skeletons that had been in a viewing room for Animal Sciences students at Lomax Hall are now residing in The IDEA Place at Louisiana Tech University, where younger children can view them and use them to learn about the skeletal structures of various animals. The skeletons now at the IDEA Place are those of a tiger, bear, deer, alligator, nutria and monkey. “They’re a wonderful addition for the IDEA Place and SciTEC,” said SciTEC Interim Director Lindsey Keith-Vincent. “We were searching for options to populate the museums, which is why we contacted the Ag department. We went to Dr. (William) Green’s lab and saw what his students were recreating. They bent over backwards to help us out and told us we can keep the skeletons as long as we want them. Dr. (Mark) Murphey helped deliver them. We can’t say enough about the whole Agricultural Sciences department and the way they helped us.” Green said the skeletons had been part of a group populating a room at Lomax Hall. “That room has all kinds of skeletons that students in Animal Science 309, the anatomy and physiology of animals, which studies structures and function of tissues and organs of animals,” Smith, a professor and veterinarian in the Department of Agricultural Sciences.  “The students piece the skeletons as part of their studies and then the skeletons go into that room. Giving them to SciTEC means that now they’re going to be of use for students of all ages for generations to come.” 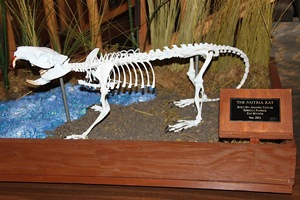 Green emphasized that the animals providing the skeletons were donated to Louisiana Tech through various means and all the animals died of natural causes or illnesses. “The skeletons come from animals donated by area zoos, the Louisiana and Arkansas Departments of Wildlife and Fisheries or from private individuals,” Green said. “None of the animals was harmed just to get the skeleton – most died of some kind of chronological disease. You can look at the bear skeleton and see where cancer has eaten away part one of this leg bones.” Those donations are crucial for both Tech Animal Sciences students and for SciTEC. “We probably wouldn’t have many if they weren’t donated,” Green said. “Some of those skeletons can cost upward of $20,000, so the donations have given us the opportunity to bring in many more skeletons than we could have paid for. “Many times the skeletons come to us in pieces and our students have to fit it all back together. That’s a great learning tool in putting the skeleton together and also in being able to see the completed skeleton. When that alligator skeleton came in, the skull was divided into numerous pieces. But the students put it back together so well you can’t really tell it was ever broken up like that.” Dean of the College of Education Dr. Lawrence Leonard agreed that the skeletons are a vital addition for SciTEC. “That kind of thing is so important for a place like (SciTEC) that operates on the generosity of others,” Leonard said. “Both the Agricultural Sciences Department and the SciTEC staff have worked to bring all of this together and it adds another dimension that will help attract students to Tech and SciTEC.” Dr. Gary Kennedy, head of the Department of Agricultural Sciences, said he was proud of the work students had done and the fact that some of those students are credited on the exhibits. 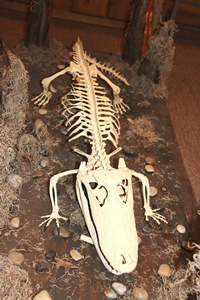 Skeleton of a Gator at the IDEA Place

“Our students get to do a lot of neat things, but sometimes all of that doesn’t get much exposure on the south campus where we’re not in the middle of things,” Kennedy said. “This is great exposure for the kinds of things we do and will be a nice attraction to bring in youngsters we hope will become future Tech students along with others. It was a winning situation for everyone.” SciTEC at Louisiana Tech is an active outreach program of the College of Education organized to serve the surrounding school systems and communities.  It was originally conceived to meet the many challenges facing Louisiana schools in the new environment of accountability and as a shift in accepted pedagogy requiring the development of higher-order thinking skills in students and the incorporation of real-world experiences and hands-on learning activities that have caused classroom teachers to re-evaluate their teaching practices. Its hands-on museum, the IDEA Place, gives visitors the opportunity to study and investigate the wonders of the world around them through the interactive exploration of scientific phenomena.  These experiences, along with more formal learning approaches, stimulate curiosity, motivate further exploration, and increase appreciation and understanding in the area of science and mathematics. The IDEA Place is open from 8 a.m. to 5 p.m. Monday through Friday and weekends by appointment. For more information, contact Keith-Vincent at (318) 257-2866. Written by T. Scott Boatright – boat@latech.edu