The Division of Nursing at Louisiana Tech University held its traditional pinning ceremony for the Spring 2013 graduates Friday in Howard Auditorium. 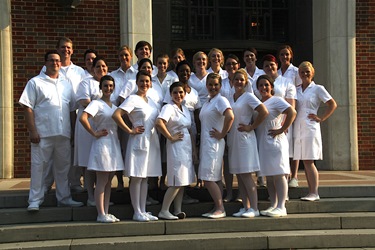 Twenty-three graduates received their Louisiana Tech Nursing pin and will be eligible to sit for the NCLEX National licensing exam after graduation to obtain their licenses as Registered Nurses.

But before the graduates were honored, College of Applied and Natural Sciences Dean James Liberatos took time to recognize the director of the nursing program, Professor Pamela Moore, who will retire from the university on June 30. She was recognized for her more than 33 years of service to the university.

“I’m very proud to honor Pamela Moore, who has served on the Nursing Department faculty for the last 33 years, including the last 13 as the director of the department,” Liberatos said. “She’s been a very important part of the Tech nursing program for a long time and will be missed.”

Awards presented during the ceremony were as follows: