For more than 40 years, William Green has served Lincoln Parish as one of the most highly regarded veterinarians in north Louisiana. From 1973 to 1999, he did so though his practice based in his hometown in Dubach. And since 1980, he has done so by serving as the university veterinarian and a professor of animal science at Louisiana Tech University. 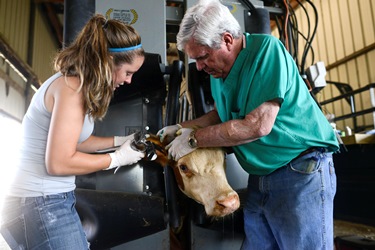 Now Green will continue serving the university both as a professor and through as endowed scholarship being established in his honor and targeted for animal science pre-veterinary medicine students at Louisiana Tech. “The number of scholarships awarded will depend on how much money we raise,” said Gary Kennedy, head of Louisiana Tech’s agricultural sciences department and incoming dean of the College of Applied and Natural Sciences. “Our goal is to raise $20,000 to endow a scholarship, which would allow us to award one annually. If we raise $40,000, we can award two per year as so on.” Serving as one of the advisers for pre-veterinary medicine students and a teacher of six different classes related to animal science and veterinary medicine, Green has played a major role in Louisiana Tech’s agricultural sciences department. “Dr. Green has been a huge asset to the Department of Agricultural Sciences,” Kennedy said. “As a doctor of veterinary medicine, he knows the tools that students need in order to be successful once they are admitted to veterinary school. A few years ago, I received a letter from the dean of the LSU School of Veterinary Medicine that praised the preparation of the Louisiana Tech students who were admitted to veterinary school, and indicating that Louisiana Tech students were the best prepared and most capable of any students enrolled in LSU’s School of Veterinary Medicine.” Kennedy said the endowed scholarship is the perfect way to honor Green for his years of service and dedication to his students and his profession. “As a highly acclaimed educator, Dr. Green has had a tremendous impact on so many of his students,” Kennedy said. “They have greatly benefited from his experience as a Doctor of Veterinary Medicine who has practiced for more than 26 years. The success of those students in being admitted to and graduating from schools of veterinary medicine is a direct reflection on Dr. Green’s renowned approach to advising and educating students. “We believe that an endowed scholarship that will support and recognize academic excellence is a meaningful way for students, alumni, and friends to honor Dr. Green and recognize his contributions to Louisiana Tech University and our community.” Those wishing to support animal science students through the scholarship fund should send donations (made payable to the Louisiana Tech Foundation) to Louisiana Tech University Foundation, P.O. Box 1190, Ruston, LA 71273-1190. Written by T. Scott Boatright – boat@latech.edu