Louisiana Tech University nursing student Caleb Faul has been elected as president of the Louisiana Association of Student Nurses for 2016-17. 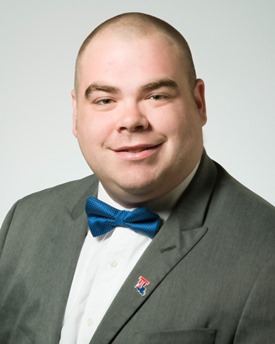 Faul was elected as he joined nine Louisiana Tech Student Nurses Association members along with chapter advisers Tanya Sims and Melissa Madden, in attending the 62nd annual LASN Convention held recently in Shreveport. “Caleb has already been an outstanding leader on campus,” said Donna Hood, director of the Division of Nursing at Louisiana Tech. “Under his leadership of the Louisiana Tech chapter of the Student Nurses Association, the chapter has grown and has been involved in many outreach projects both locally and across the state. This level of involvement resulted in recognition of Tech’s chapter at the state convention.” The convention hosted keynote speakers and nursing focus sessions that included integrative medicine, leadership, healthcare policy, pharmacology, nursing careers and licensure examination preparation. Louisiana Tech’s SNA chapter gained statewide recognition by earning four awards: Best Community Health Project, First and Second Place for the Image of Nursing Service Projects, and the SNA with the most School Spirit for the Convention. Hood said Louisiana Tech’s Division of Nursing congratulates Faul as he leads student nurses across the state throughout the upcoming year. “Caleb is the third Louisiana Tech nursing student to be elected as state president,” Hood said. “This is excellent exposure for our nursing program and is a wonderful opportunity for his personal growth as a leader. Caleb has great vision for the future and knows how to work hard to make that vision a reality.” Written by T. Scott Boatright – boat@latech.edu