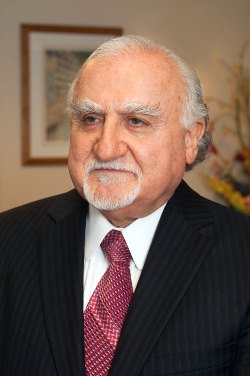 Salem’s presentation titled “Lessons I Have Learned from Cancer Research and Treatment,” will take place at 3:30 p.m. in University Hall on the Louisiana Tech campus.  The event is free and open to the public, and is sponsored by the Lincoln Health Foundation. Salem, who is a physician, researcher, educator and international expert in cancer medicine, is a renowned pioneer in the field of cancer biology.  In addition to his role as president of Salem Oncology Centre, he is also director emeritus of cancer research at Baylor-St. Luke’s Episcopal Hospital in Houston.  Salem was one of the first researchers to demonstrate that a chronic infection in the intestine may eventually lead to the development of cancer.  His work on intestinal cancer, known as Immunoproliferative Small Intestinal Disease (IPSID), and the relationship between infection and the development of intestinal cancer has become a classic in modern medicine. “We are tremendously honored to have Dr. Salem on our campus,” said Louisiana Tech University President Les Guice.  “I know that our faculty and students will be inspired by his presentation of his research findings. I’d like to offer special thanks to our faculty for organizing this lecture series which we are finding to be most impactful on our campus and in our community.” Salem has been honored with many awards for his contributions to the cancer research and has been invited to serve on the editorial boards of several prestigious cancer research journals. His research on IPSID was recognized by the Nobel Prize Committee as the gateway for research on H. pylori in the stomach, and its causal relationship to peptic ulcer and stomach cancer, which won the Nobel Prize in Physiology and Medicine in 2005. In the early 1990s, Salem served on a healthcare advisory committee to the White House and, in 1994, received the Republican Senatorial Medal of Freedom.  In 1998, he was awarded the Ellis Island Medal of Honor for his “exceptional humanitarian efforts and outstanding contributions to American science”.  Salem was honored in 2006 as “Scientist of the Year” by the National Italian Foundation for the Promotion of Science and Culture, and was decorated in a special ceremony held in Rome, Italy. As an interdisciplinary lecture series that focuses on advancements in the fields of biomedical engineering, biology, physics and chemistry, the New Frontiers in Biomedical Research seminar program at Louisiana Tech strives to promote an understanding of human health and disease by interacting with leaders in these research fields.  The series also seeks to expose students to growing areas of research and to enhance Louisiana Tech’s own impacts in biomedical research. All New Frontiers in Biomedical Research seminars are free and open to the public. Seminars begin at 3:30 p.m. at University Hall on the Louisiana Tech campus and are recorded for future viewing.  For more information on the series, a schedule of speakers, and to view recordings of the seminars, visit the New Frontiers in Biomedical Research website at http://biomedicalresearch.wix.com/new-frontiers or contact Dr. Jamie Newman at jjnewman@latech.edu or Dr. Mary Caldorera-Moore at mcmoore@latech.edu.