Cinthia Rincón and Anna Morris, two Louisiana Tech students enrolled in the winter quarter offering of ART310: Digital Painting, were recognized for their outstanding work in the relatively new program with a special weekday luncheon attended by University President Les Guice, faculty, and other administrators. 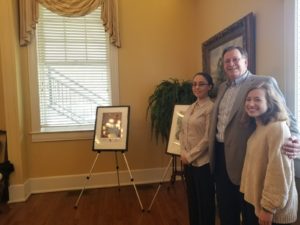 Rincón, a studio art major from Houston, and Morris, a biological sciences major from Baton Rouge, both worked on projects related to illustrating genome editing, and each put her own perspective on this current and sometimes controversial topic. During the luncheon, it was announced that their artwork would be featured on the new Frontiers in Biomedical Research Seminar Series brochure, and they were given their own Wacom tablets to continue their pursuits in digital painting. Digital Painting was the first class created for Tech’s new minor in pre-medical illustration, an interdisciplinary minor combining courses in art and biological science to prepare students either for application to graduate school in medical illustration or to allow students to pursue a dual passion for art and science. The class began with a collaboration between School of Design chair Nick Bustamante, School of Biological Sciences associate professor Dr. Jamie Newman, and biomedical engineering assistant professor Dr. Mary Caldorera-Moore. But the program became reality with a generous donation of a class set of Wacom tablets by Tech alumni Justin and Jeanette Hickley, who remain involved, both in the class and in the development of a pre-medical illustration curriculum. Rincón came to Tech to pursue professional aviation before finding her passion and now a possible future career in studio art and medical illustration. Morris is interested in a career in medicine, a field in which she can use her art skills to communicate more effectively with colleagues and patients; she recently presented on her experience in digital painting and medical illustration at the 92nd annual Louisiana Academy of Sciences meeting and earned first place in the science and humanities undergraduate poster competition. “This was a great opportunity for us to recognize the hard work of these two students and to be able to showcase their work with members of the Tech community,” Bustamante said. “The Hinckleys have been instrumental in facilitating the success of this program, and we were thrilled with their recommendation to honor our students with their very own tablets.” The popularity of digital painting since it was first offered in Winter 2016 is evident. Bustamante is teaching a second section of the course this spring, doubling the number of students who have the opportunity to learn this new technology and gain first-hand experience with medical illustration and with working with a client to produce work for their portfolios. In its first academic year, Pre-Medical Illustration already has five students actively pursuing the minor. Developed by Newman and jointly organized by Newman and Caldorera-Moore, the New Frontiers in Biomedical Research Series has brought many internationally known research leaders to Tech and is now in its fifth year. The series focuses on biomedical research with the intent of demonstrating the broad and interdisciplinary nature of this field of research.