Dr. Natalie Clay, assistant professor in the School of Biological Sciences at Louisiana Tech, has won the prestigious 2017 Elton Prize, awarded annually by the British Ecological Society for the best paper in the Journal of Animal Ecology written by an early career author at the start of their research career. 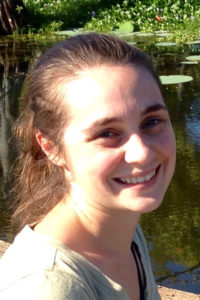 Her paper, “Towards a geography of omnivory: Omnivores increase carnivory when sodium is limiting,” was written in collaboration with Richard J. Lehrter and Michael Kaspari. “This award is a humongous honor and I am humbled to be recognized by the British Ecological Society, and for an award named after Charles Elton,” said Clay, who earned her Ph.D. from the University of Oklahoma in 2013 and her undergraduate degree from Colby College (Waterville, Maine) in 2008. “Charles Elton was a pioneering ecologist who recognized how what organisms ate impacted everything from their behavior to how food webs are structured.” Clay’s research builds upon these concepts to determine how nutrition can shape decisions made by organisms about the relative proportions of animal to plant material they consume. This research demonstrated that omnivory, which is the consumption of both plant and animal tissue, has a geography that is at least in part regulated by sodium availability. Sodium is essential for muscle function, neural activity, and osmoregulation in animals. When sodium is scarce, one way for animals to acquire sodium is to consume more animal tissue, which is 10-100 times higher in sodium than plants. “We showed that omnivorous ants were more carnivorous in forests with lower sodium availability than similar forests with higher sodium availability” Clay said. “As humans alter environmental sodium levels through activities like irrigation, mining, and road salting, this could have consequences for the behavior of the organisms in these habitats, which impacts how these ecosystems function.” At Tech, the Clay Ecology Lab uses invertebrates like ants, termites, and other detrital organisms to explore how nutrient availability alters detrital pathways and how multi-trophic interactions impact ecosystem functions, like decomposition processes. Here is what the British Ecological Society said about Clay’s research and paper, which shed more light on the question of whether or not omnivory varies geographically, and if so, why. In a crystal clear and wonderfully written paper, Dr. Clay describes how she and her collaborators took advantage of natural gradients in net primary productivity (NPP), sodium (Na) deposition, Nitrogen (N) and, climate at 20 sites in the eastern United States to test whether (and why) omnivory in ant communities varies geographically. At each site, she used a tried and true method to document foraging behaviour and resource limitation in ant communities (in this case, different resources offered in plastic vials) and coupled those observations with stable isotope analyses. After documenting the feeding behaviour of more than 18,000 ants from 72 species at 20 sites from Georgia to Maine, Dr. Clay discovered that omnivory does, in fact, have a geography. And more interestingly, when she compared the effects of NPP, Na, and N on the degree of omnivory in ants, she found that best predictor was Na availability. This is a surprising and important result for several reasons (which Dr. Clay and her colleagues describe in their paper), but chief among those reasons is the novel result that because consumers are Na-limited, geographic or temporal variation in Na availability should have cascading consequences on ecological pyramids, and the diverse suites of interactions that tie species together in ecological communities. So not only is there a geography of omnivory, but Dr. Clay and her colleagues show why. She then extends the work by pointing out that humans are altering Na deposition, and this will likely have important, and perhaps predictable, consequences on food webs, and likely the ecosystems in which they are embedded. In sum, Dr. Natalie Clay’s cutting-edge work extends Elton’s ideas and opens up broad avenues for future research on the structure and dynamics of food webs. Clay will receive a cash prize, membership in the BES, a year’s subscription to the Journal of Animal Ecology, and a contribution to the costs incurred in attending the BES Annual Meeting in the UK if she wishes to give a presentation on her work. The winner is selected by the Senior Editors of the Journal at the end of each year and an announcement is made the following year.