The cries of pain and anguish occasionally being heard on the third floor of George T. Madison Hall at Louisiana Tech University have nothing to do with bad grades or academic struggles. Instead, Louisiana Tech Division of Nursing faculty members hope those are the sweet sounds of their student’s future success. This quarter, Tech’s Nursing School has moved to a new hospital simulation laboratory room on the third floor of George T. Madison Hall, and thanks to grants provided by the Lagniappe Ladies, the room has new, special-built partitions including a one-way mirror instructors can stand behind and observe students carry out medical emergency scenarios. 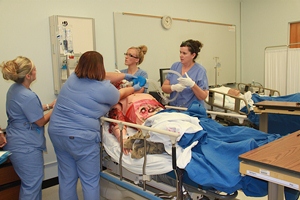 “We didn’t have the partitions or mirror in the old room,” said Pam Todd, skills lab instructor for the Tech Nursing Program. “So the students could see the instructor working the computer and could see from that when changes (in the patient’s condition) were coming, so they would be prepared. This way, they can’t see when the patient’s condition is being changed, so that have to carefully monitor vital signs and visual cues, just as they would in a real-life hospital situation.” Usually on a hospital stretcher or bed in the classroom is “Meti-Man,” a high-fidelity mannequin and advanced computer system controlled by an instructor that simulates medical conditions, controls things like heart and breathing rates and responds to actions taken by students in dealing with the given medical situation.  Meti-Man’s chestcan be seen rising and falling as he breathes.  He also blinks, vocalizes his pain (with the help of a voice synthesizer microphone controlled by one of the instructors behind the one-way mirror) and can even be used to train to insert intravenous fluid lines and check urine output. Recently some Tech nursing students were put through a scenario where Meti-Man had been badly burned in a meth-lab explosion, with realistic-looking third-degree burns designed and created by the nursing skills faculty placed over 50 perfect of his body, including all of his face. He even had a nose ring that had melted into his face as a result of the explosion, and one of the nursing students portrayed a family member with Meti-Man in the emergency room providing plenty of distraction as she wept and wailed over her injured “loved one.” “It makes it tough when you can’t look to an instructor for help, and even more you’re being distracted by someone playing a distraught family member,” Tech nursing student Jenny Alford said. “But these are things we’ll be facing once we start our nursing careers, so hopefully this is preparing us to be able to handle the real thing.” “The new room is so much better because it looks like an actual hospital room,” Todd said. “And the partitions and one-way mirror the instructors stand behind during the scenarios help so much. There’s also a supply wall where students have to go over and pick out the particular supplies they need, as opposed to having the needed supplies already laid out for them because of lack of room. That’s the way we had to operate before we moved to the new simulation lab and the fact the students now have to grab their own supplies, as they would in a real emergency room, really helps with their critical thinking skills. “This improved sim lab is helping us stay on the cutting edge of technology and use Meti-Man the way he should be used.  Everyone wants students to make seamless transition from college to work in the real world. This should help accomplish that.” 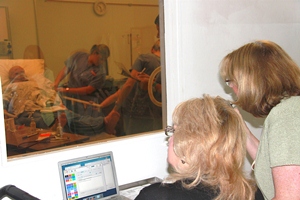 The Lagniappe Ladies, a giving circle created for women who passionately support the mission and the vision of Louisiana Tech University, provided two $5,000 grants to help fund the partitions and one-way mirror. Todd said this group of Tech alumnae and friends pool their financial resources and then jointly decide how the resources are invested.  In essence, the group awards grants to campus organizations, teams, projects and initiatives that it deems would make the most significant positive impact upon the university and the community. “We are very grateful to the Lagniappe Ladies because we couldn’t have developed the new sim lab the way we wanted to without them,” Todd said. “We’ll have room for another high-fidelity mannequin that can not only impact our nursing students and (Area Health Education Center) high school students from the region who come to visit and participate in the lab, but also include the community in disaster drills and possibly in the future with collaboration with other medical personnel.” Todd also expressed appreciation to Stephanie Carwile, an assistant professor in Tech’s architecture program who designed and built the partitions. “We can’t thank her enough for everything she did,” Todd said. “Stephanie did a wonderful job and we’re very grateful for all the work she did that helped make the new sim lab so much better.” Written by T. Scott Boatright – boat@latech.edu